Washing the dust of centuries off my window I discovered anew the brilliant blueness of the sky, and I began to dream and dance, feeling the cluttered space called “home” is not big enough to hold the soul of a daydreamer and the grace of sunlight dancing tiptoed across a floor covered in dust-bunnies scared of brutally honest daylight.

At night I felt the darkness of the city closing in, not the darkness caused by the absence of light but rather the antonymic omnipresence of shallow light and screens  and neon signs leaving no place for the magic of stories told in the dark. So I filled a jar with colourful lights myself and put up a tiny cardboard sign, “here be fireflies”, and I danced to music nearly as old as myself and pretended the room was adjacent not to street lamps and rows upon rows of three-story houses but to open fields and grass covered paths leading to creaky doors hiding more rooms holding wonder and bold dreams instead of the plastic-shaped pieces of cheap and short-lived idols of these dreams.

For a moment I could believe that dancing and dreaming would be enough for creating one night of tidal waves sweeping away all the speechless artefacts of a culture with nothing new to tell, but when I opened the eyes of my inner child again, all the heaps of rubble covered in the blood of dying hearts had remained in streets wandered by screen-chained ghosts and surrounded by beauty robbed of attention and pure-minded admiration.

Still, every now and then I meet someone, most of the time a child, who is not yet oblivious to the magic of the beauty in between and who might be willing to learn the art of dreaming away the gangrenous layers of one-use happiness and purchasable instant status covering the fresh, green part of our society still pulsing with true hopes and a hunger for life stripped of needless weights and surrounded by open windows.

Today I came across this cool project http://www.instructables.com/id/Jar-of-Fireflies/all/?lang=de while looking for cheap electronic firefly jars. Sadly my skills are way below this level of creating awesomeness, so I decided to try a very simple version first (still with a little help), which is supposed to be upgraded by adding an ATtiny controller later (to make the LEDs blink/fade).

Basically it’s a mess of three big green LEDs, three resistors, some short pieces of wire, masking tape, and a battery case (holding three AA batteries) which is attached by a screw terminal. Instead of a jar I used a small metal lantern.

on top of the lantern: three resistors (90Ω each) and messy blobs of solder

Finally I managed to get the whole thing to light up and was very happy to hang it from our small living room tree: 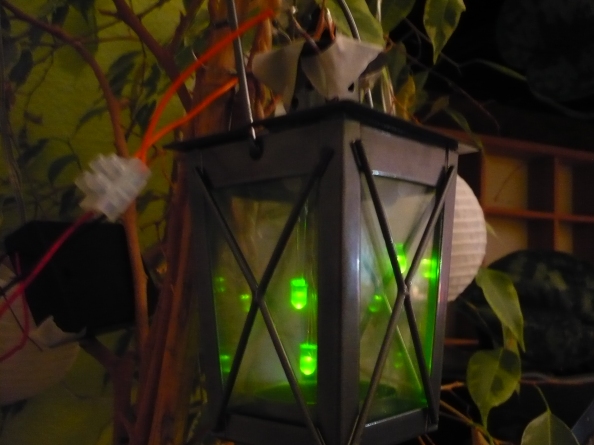 LEDs sitting in a tree …

Yaaaay, green glowing stuff. But what to do with the red LEDs? Hm, maybe I could put one of them into this orange plant-thingy ..

Success – a glowing plant thingy (what on earth is it called? Lantern plant?)

These are just two very small projects, but it’s been quite a while since I learned all this stuff in school, so I really need to ease my way back into it little by little.

Hey there, today I want to share a cool TED talk with you:

I knew about body feedback before, but still it was cool to watch this and learn some more details :)

Ever since I started to listen to older music, watching science fiction, and reading tons of books, there has been a bunch of connections in my mind between certain songs, characters, and stories.

I decided to list some of the associations. Today I’ll let you take a peek into my head while I listen to Roxette:

Wish I could fly (Roxette): Animorphs books. The waking up from nightmares described in the song fits the struggles of the young folks and their fights to save the world. Plus it reminds me especially of the early Tobias and Rachel relationship (the model and the bird boy).

Joyride (Roxette): I don’t really know what it reminds me of, it’s more a concept than a certain person or storyline … maybe the glimpses of hope, joy, and love in the middle of the chaos. I’m a little into dystopia, in case you didn’t know. Or take TV series which have a serious undertone, but every now and then there are quirky episodes with running gags, weird conversations, or self-mockery. If you have watched The X-Files episodes like Humbug, War of the Coprophages, Jose Chung’s From outer Space, Unusual Suspects, or Detour, you know what I’m talking about. Not to mention the countless lines of fluffy banter in many episodes of Stargate: SG1 (“Space monkey!”).

Listen to Your Heart (Roxette): My leaving after gap year. One year in a small village surrounded by hills and new friends. Life is a story as well. Saying good-byes is a repeated element in this story.

Stars (Roxette): Stargate: SG1. Sam and Jack. And episodes like Grace. Heroes who keep getting separated and still either fight their way back to each other or wait for a long time. Aww. And I love this song, it’s pretty unique (and just pretty as well – though the video is a tad weird) and creates a nice atmosphere. I’m not yet sure if it fit’s the webcomic Salty Rain, but it might. There has to be a song for it! In addition this song is part of the soundtrack of my life story as well, my love for the stars, moving to a big city, so many dreams.

The Look (Roxette): First person associated: Sam Cater (Stargate). Wrong eye colour, I know. To me the song is about how a woman can be strong and confident while still being very human, be found as beautiful both inside and outside, and loving life, so it’s positive.

Roxette songs in general: Stargate: SG1 (early seasons).  Come on, it’s the late nineties. (I haven’t listened to the newer albums yet, but I ordered some of them today.)

A song I don’t really know where to place yet is Queen of Rain. It’s sad, but oh so beautiful. The video reminds me of many things, but I can’t name most of them. There’s the character Rika (Ruki) from Digimon Tamers (e.g. the scenes with the shadowy figure turning; and placing bets), the car scenes and hallways reminiscent of TXF, but I can’t place elements like  the billowing curtains/sheets. There’s something in the back of my mind. The Mists of Avalon? Maybe it just reminds me of one or two ending songs by Celtic Woman. There must be some book or movie I know involving lots of doors though. And somewhere in my mind the opening of the TV show Roswell is flashing pictures  as well.

Update: I think I found at least one of the missing associations – the Wired novels (and especially Exile) by phoenix-cry on deviantART (Stargate: SG1 fanfiction, but these are five complete novels with a lot of marvellous ideas and images); the setting of Exile is close to the imagery in the music video, at least in my mind.

I’m not a very athletic person and not fit enough to run/jog all the way from here to the train station (which is a ten minute walk, so not very far). After I stopped horseback riding at the local riding stable – which was full of funny ponies – because of school in the afternoon I hadn’t been involved in any kind of sport. Sure, I tried to go for a run every now and then, but it was not my cup of tea. I’d always wanted to try martial arts (looks cool, is useful for self-defense, and enhances one’s discipline) but somehow I never picked myself up and went to that aikido class.

Then a friend of mine introduced me to capoeiratwo years ago. What I really like about capoeira is that it is a training for many things at the same time – timing movements with the rhythm of the music and the movement of other people, sharpening one’s reflexes, and improving balance. Then there is building muscles everywhere, stretching a lot while warming up, and enhancing one’s flexibility bit by bit to get ready for some acrobatics. It’s great to know how to evade kicks and how to do high kicks without falling over afterwards (though I’m still working on that). Maybe it’s not exactly self-defence in the classic sense, but enough to feel a bit more confident when walking around at night! What’s also nice about capoeira is the inclusive training. The groups for training normally accept people regardless of sex, age, or weight (okay, there might be special groups for kids; I’m talking about everyone old enough to make it to the training on their own in the evening). Where I go there is not real line between beginners and advanced learners. Sure, the more advanced folks go to other training sessions in addition, but some of them come to the beginners’ lessons as well to stay in shape, have fun, and help us to work on our technique. Although we train as a group I don’t have to focus on all people at the same time because we often do exercises while standing in two lines or following each other (meaning I can concentrate on the trainer or the person in front of me and mimic their movements), and we do partner exercises which I really enjoy. So I get a nice balance of being around people and at the same time not overwhelming myself the way I maybe would in team sports. In addition, unlike other martial arts it’s not all about throwing people to the floor or really landing the kicks, and more about question and answer – attack and evasion. It’s pretty playful, actually, and often even referred to as a game, but don’t let that blind you – it’s really exhausting as well :)