One thing I enjoy about going to Capoeira class is the berimbau music, which is rhythmic and somewhat monotonic. After some months of weekly training to the same CD with music running over and over again, my body started to react to the music itself by beginning to move. Even now, as I sit at home with my laptop and decided to listen to some toques on YouTube, my head and shoulders started swinging from one side to the other, mimicking their movement during the ginga.

I like the feeling of being carried by the rhythm. It’s also helpful for learning new combinations of movements, because if your body does the ginga, the basic movement, on it’s own accord, your head is free for the complicated parts. And after practising the same combination over and over for a while it becomes part of the rhythm and you just do it without thinking about what to do next – at least on a good day.

I guess the song “I see fire” and reading the first volume of the Lord of the Rings trilogy triggered my longing for open spaces again. For some time now I’ve known I get overwhelmed and distracted by stuff very easily, but I tend to ignore and then forget this fact. Tonight I’m sitting at my desk, unable to concentrate on my writing, even though my self-set deadline for handing in this paper is in two weeks.

Not feeling ready for a big purge yet I try to get some things out of my way little by little, and what is not in use right now but is likely be used again in the future – e.g. curtain rods – will be put away out of sight for the moment. Not the most minimalist thing, but hey, I guess even wandering folks like Aragon have some things stowed away, leaving them in the houses of friends they visit from time to time. (Sorry, I watched a talk on YouTube earlier today and the speaking scientist quoted the line “all that is gold does not glitter”). I’m also going to put all my childhood memorabilia into one place, saving them in case I’ll have someone to inherit them to one day. The bed drawer blocked by my night stand should do fine.

Things added to the give away box:

I also brought some stuff home from yestarday’s swapping party: biking gloves, some four tops (mostly for experimenting with style, I might alter or re-swap them after a while), and two items for my birthday party decoration in autumn. Sadly none of the items I had brought to the party found a new home … maybe next time? Otherwise they’ll end up in the next donation bag.

I want to live and breathe the way mind and body are trained to be in constant movement without losing balance. There is not a lot of balance in my life right now, and my reflexes are mere instincts, not the sharp, honed tool they could be.

(‘Enter the circle without fear’ – Capoeira is always played by two persons inside a circle of other people.)

Finally summer is here for real. We went out for a walk in the evening and the air was still hot, but with a gentle breeze. And I found a stick for my next try at the art making a bow (the first stick broke because it was too old, while the second stick, which I dragged home yesterday, is twisted in itself). So much sun and light and green leaves in the trees. It makes me want to live outside for a while, to wander, to leave the weird rules and ideas of post-modern Europe and quite a bunch of the latest inventions behind. 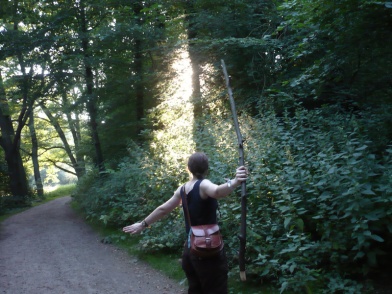 I tried to capture in a picture the beautiful sunshine gleaming through the foliage and casting shadows on the meadow we crossed, but it doesn’t do the real thing any justice. https://starfishskiesphotography.wordpress.com/2014/07/19/summer-in-trees-and-grass/

Today I’ve been to the big open air fleamarket for the first time this year. I took some pictures of shiny stuff I didn’t want to buy as I just have no use for it.

You can click on this link to see more pictures:

Apart from taking pictures of random stuff I bought a box for my sewing utensils, a wooden wheel-board-thingy for the small tree in our living room, a white tunic blouse, and two small items I might give as gifts to other persons. 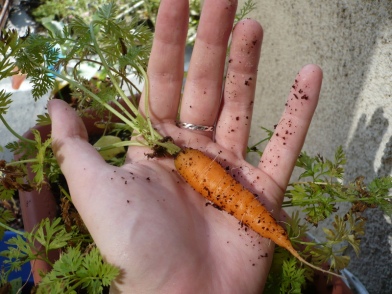 Today I had my first home-grown carrot for breakfast.

I found it when I was checking my vegetable pots and boxes because we had a lot of rain the last few nights and I don’t have a draining system for my tiny garden. Curious me decided to see how the carrots and radishes were faring, because especially the former ones are growing pretty close to each other. In the middle of the box I found this lovely carrot, then decided to eat it, as it wouldn’t have grown much bigger anyway – it was nearly as long as the box is deep already, and squeezed in between of some smaller carrots (which now have new room to grow).

When I was a young child and we still lived in a village we had some carrots in our big garden, but when we moved to a small town the soil in our garden there didn’t work for carrots (or the snails ate them all). Last year my first tiny urban garden yielded nothing but some bitter lettuce and a handful of mini-potatoes as the rest of my vegetables dried up in the sun, so this was the very first carrot all planted, cared for, and eaten by be my. It didn’t taste that good (a little on the bitter side), but I don’t care.I don’t now if I told you before, but my plan of decorating the roof in front of our east-facing windows with cornflowers worked! They don’t need a lot of soil, apparently, to bloom in wonderful shades of blue and purple.