Freedom is
walking alone in the rain tonight
letting my hair fly in the soft winter wind
taking pictures of neon lights reflecting on wet pavements
dreaming of Shibuya, neon mazes, and cyberspace.

Because a friend of mine had been nagging me about recreating Rey’s hairstyle after watching the new Star Wars movie together last week, I decided to give it a try. I followed this video tutorial, more or less:

I didn’t include the small elastic above the top loop and instead of several bobby pins I used one u-shaped hair pin per loop to secure the hair wrapped around the elastic. My hair is more shaggy than curly today and just wouldn’t cooperate in forming nice, smooth loops, so I’ll try this again on another day.

I love peanut sauce with rice or stir-fry dishes, but I’m not overly fond of cooking it on the stove. This week I came up with a quick version that can be prepared in the microwave and is especially helpful when needing only a small amount.

You need:
– teaspoon
– microwave safe mug or a similar container
– peanutbutter or (I use a Dutch brand which has some salt and sugar in it but is not as sweet and soft as other brands)
– Sambal Olek (or try mashed tomatoes plus spices)
– water

Mix to your own liking (I’d suggest going easy on the Sambal Olek and water first) and microwave at 800 W for 30-60 seconds, stir it, add more water or hot stuff if needed, microwave for another 30-60 seconds and stirr again. Tadaa, instant awesome hot peanut sauce! :)

I wanted to share another inspirational capoeira video with you, but it’s not available in my country anymore without a detour. If you want to have a go at trying to watch it, you can click here.

Meanwhile, have this rather accurate description of view points: 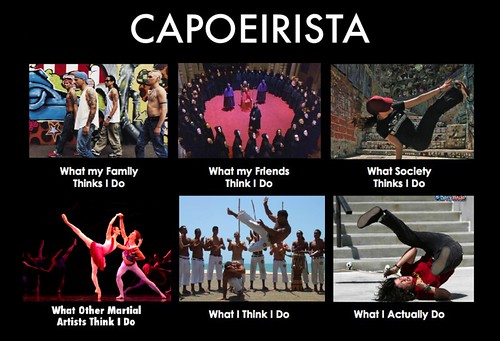 Well, okay, my family doesn’t think I’m in some street gang. But the last picture somewhat sums up what I look like when trying to do advanced movements and not having the strenght to come back into a standing position.

It’s been a while since my last capoeira update, sorry for that. In late autumn I was sick for a few weeks and lost a lot of the muscles in my back and my arms and a bit of the flexibility for which I had worked so hard during the summer. As I stated a few months ago, one of my goals for 2016 is the ponte walkover. It’s still on my list, but I still have to work on regaining said muscles and the flexibility of my spine (and straighten my arms more) before I can think of starting to work on the actual walkover part. I’d love to be able to do at least an assisted walkover by summer, so I could do it in the park on the green grass where I started working on this move. Before Christmas break we practised the aú de frente (mix of a cartwheel and a front walkover; some people in our group call it aú amazonas, which I think is confusing, considering it is also another name for the aú batido) in one class. I tried it a couple of times after that and today we practised it again. It’s a really pretty movement and takes more courage and flexibility/balance than raw strength, so this is on my “learn before summer is over” list as well, especially since I’m already half way there. So 2016 is going to be my walkover year ;) This includes trying to get to a free standing handstand, which would make many movements a lot easier and more balanced. And as I’ll finally, finally get my very own berimbau in just a few days if all goes well (when I asked him today, contra mestre said he’d try to prepare a médio for me by Friday or Monday from the materials he brought back from Brazil recently!), another goal would be learning at least one new toque.

I didn’t make a lot of further progress concerning the basic techniques – apart from a faster and more precise martelo maybe -, but I started to learn and/or use a few new movements. The aú de frente I already mentioned above, but I also did my first few rather miserable attempts of an au cabeça no chão (sort of a cartwheel with the head on the ground). Additionally I’m working on including more ground movements in general, e.g. different rolês and fintas of  low kicks. I can hold a handstand for a few seconds after pushing away from the wall sometimes, or hold it for a longer time while touching the wall for support with only the toes of one foot. And my last macaco today seemed to be good enough for the contra mestre to nod and walk away instead of giving tons of instructions. I’m still not able to do one starting with my left hand, though.

My newest inspiration are the videos by Andrea Cazotti. He combines capoeira, acro dance, tricking, and a lot of heart and soul to create beautiful movement art. These are two of my favourite videos by him (narrations in French, but with English subtitles):

I’ve also started to read Tao of Jeet Kune Do (Bruce Lee). While it isn’t about capoeira at all I can relate a lot to the ideas and the mindset described in this book. Sadly the book on Capoeira Conditioning (bodyweight training with capoeira movements) hasn’t arrived yet. It should have been here by end of December.

How have you been, capoeiristas? What are your goals for the next few months? What is your inspiration?