5:30 a.m. on a Saturday – creative break from writing my master’s thesis. I decided it was time for this old teapot to be turned into something beautiful. Hopefully I’ll find some lavender to plant it among the ivy.

Gallery of recent additions to my upcycling project – turning juice-to-go plastic cups into art. I like the combination of the clear cups and ivy growing upwards along the drinking straw.

Remember last year’s post about my attempts to turn our kitchen into a greenhouse? I think it’s time for an update:

One of my many hobbies: filling all kinds of old containers with green life. Mostly ivy, sempervivum, and some fern, aloe vera, moss, and a green plant I can’t name (but it multiplies on its own). I love ivy. And how adorable is the sempervivum in the little milk jug? Not sure yet what to do with the old tea kettle in the background  I found recently – use it to brew ginger tea, or plant ivy (or maybe lavender) inside? 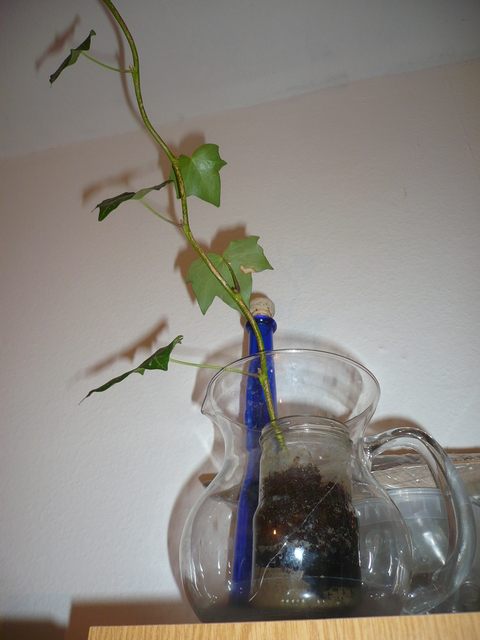 Ivy in a cracked glass pitcher we don’t use anymore as it leaks (so I just put already potted ivy inside instead of filling the pitcher itself with soil the way I’d have preferred to). 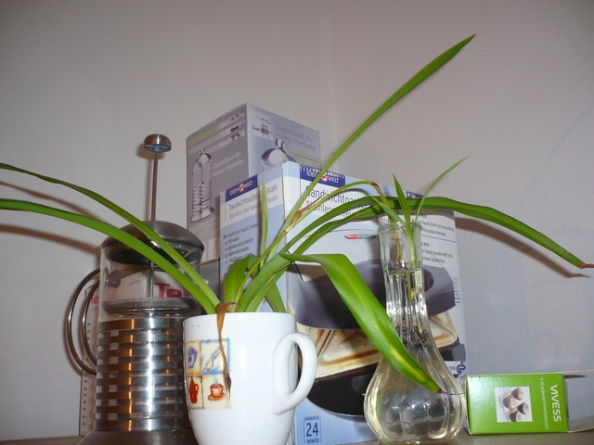 As I said, this kind of plant multiplies. It starts to grow a “child” dangling from the mother plant, which you then put into water until it grows its own roots; then it can be potted and cut off. This little family lives on top of our fridge, next to the coffee making thing.

Recently I stumbled across the song “China In Your Hand” (T’Pau) again and for the first time learnt that it wasn’t actually about the country China (as I had believed when I was a child), but about a teacup and Frankenstein’s monster.

It’s harder to see the Frankenstein reference when listening to the popular single version, which was shortened with some of the more obvious parts left out. Some missing lines in the shorter version are

If you put these back in (for the full lyrics of the album version you can go here: http://www.lyrics.net/lyric/22918591) the picture gets much clearer.
And I was joking, well, semi-joking when I said it was about a teacup. I’m going to quote Wikipedia for this:

“The song’s lyrics refer to the novel Frankenstein and its author Mary Shelley.
This is more readily heard on the longer album version of the song, as the re-recorded single edit omits most of the more obvious references to the book.
[…]
Lyric writer Carol Decker explained that it is the effect that if you hold a china cup to a light, you can see your hand through it
– therefore ‘china in your hand’ means something that is transparent”
(https://en.wikipedia.org/wiki/China_in_Your_Hand)