Today I came across this cool project http://www.instructables.com/id/Jar-of-Fireflies/all/?lang=de while looking for cheap electronic firefly jars. Sadly my skills are way below this level of creating awesomeness, so I decided to try a very simple version first (still with a little help), which is supposed to be upgraded by adding an ATtiny controller later (to make the LEDs blink/fade).

Basically it’s a mess of three big green LEDs, three resistors, some short pieces of wire, masking tape, and a battery case (holding three AA batteries) which is attached by a screw terminal. Instead of a jar I used a small metal lantern.

on top of the lantern: three resistors (90Ω each) and messy blobs of solder

Finally I managed to get the whole thing to light up and was very happy to hang it from our small living room tree:

LEDs sitting in a tree …

Yaaaay, green glowing stuff. But what to do with the red LEDs? Hm, maybe I could put one of them into this orange plant-thingy .. 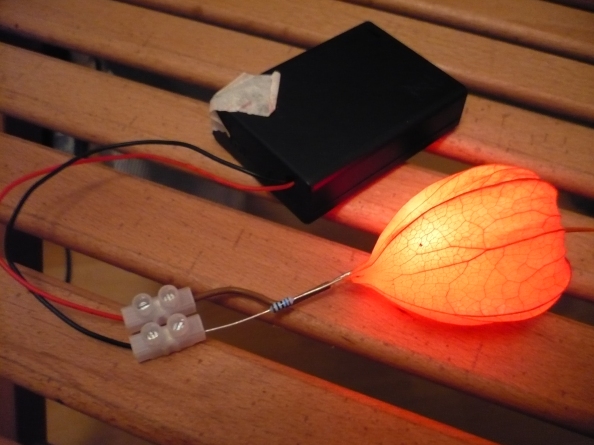 Success – a glowing plant thingy (what on earth is it called? Lantern plant?)

These are just two very small projects, but it’s been quite a while since I learned all this stuff in school, so I really need to ease my way back into it little by little.