Finally summer is here for real. We went out for a walk in the evening and the air was still hot, but with a gentle breeze. And I found a stick for my next try at the art making a bow (the first stick broke because it was too old, while the second stick, which I dragged home yesterday, is twisted in itself). So much sun and light and green leaves in the trees. It makes me want to live outside for a while, to wander, to leave the weird rules and ideas of post-modern Europe and quite a bunch of the latest inventions behind.

I tried to capture in a picture the beautiful sunshine gleaming through the foliage and casting shadows on the meadow we crossed, but it doesn’t do the real thing any justice. https://starfishskiesphotography.wordpress.com/2014/07/19/summer-in-trees-and-grass/

In case you haven’t read Huxley’s “Brave New World” yet, you should do so, it’s a true classic among dystopian literature. If you are unable to find a copy for yourself at your local book store or libary, you can try this online resource: http://www.huxley.net/bnw/one.html

Washing the dust of centuries off my window I discovered anew the brilliant blueness of the sky, and I began to dream and dance, feeling the cluttered space called “home” is not big enough to hold the soul of a daydreamer and the grace of sunlight dancing tiptoed across a floor covered in dust-bunnies scared of brutally honest daylight.

At night I felt the darkness of the city closing in, not the darkness caused by the absence of light but rather the antonymic omnipresence of shallow light and screens  and neon signs leaving no place for the magic of stories told in the dark. So I filled a jar with colourful lights myself and put up a tiny cardboard sign, “here be fireflies”, and I danced to music nearly as old as myself and pretended the room was adjacent not to street lamps and rows upon rows of three-story houses but to open fields and grass covered paths leading to creaky doors hiding more rooms holding wonder and bold dreams instead of the plastic-shaped pieces of cheap and short-lived idols of these dreams.

For a moment I could believe that dancing and dreaming would be enough for creating one night of tidal waves sweeping away all the speechless artefacts of a culture with nothing new to tell, but when I opened the eyes of my inner child again, all the heaps of rubble covered in the blood of dying hearts had remained in streets wandered by screen-chained ghosts and surrounded by beauty robbed of attention and pure-minded admiration.

Still, every now and then I meet someone, most of the time a child, who is not yet oblivious to the magic of the beauty in between and who might be willing to learn the art of dreaming away the gangrenous layers of one-use happiness and purchasable instant status covering the fresh, green part of our society still pulsing with true hopes and a hunger for life stripped of needless weights and surrounded by open windows.

In the French October 2013 issue of Cosmopolitan (a fashion/lifestyle magazine for women) some interesting references to the genres of science fiction, agent/spionage thriller/crimi, and film noir can be found, and some pretty specific allusions to The X-Files.
I don’t know if the English and German issues have the same content, because I only bought a copy as a special travel indulgence during our vacation in France. Normally I don’t care a lot about about fashion or celebrity, and I don’t like spending money on magazines about these topics (hey, what are free blogs for?). So it was an even bigger surprise we found the pictures and hints which will be described in the next paragraphs.

The pictures are included for educational purposes only.

The cover of the issue looks pretty ordinary and typical for a women’s fashion mag: Held in tones of white, red, and pink, and featuring a woman wearing a somewhat revealing dress with black lace, herself sporting a classic-chic look. There is a text reference to British style as well, which was the first thing I associated with The X-Files, even before opening the magazine. How so? Special Agent Dana Scully often is shown in a classic look somewhere between old-school office chic and British prep style, at least that’s what I’d call it. If this is way off, please tell me the proper label for her style.
I marked the pages with four colours of sticky page markers – orange for X-Files in general, green for Scully, blue for Mulder, and pink for any other references.

associated with Scully and The X-Files were found in the “So British” section, indeed. The first of these picture shows a petite woman with middle length reddish-blond hair in a tweed skirt and blazer combination hovering in an upright position over a lawn, in classic “alien abduction” pose. The torso and head/neck is rigid and the extremities seem doll-like limp at the same time, eyes closed. Some pages later, a series of pictures again is featuring a women of similar type (with shorter hair, Scully-length) in a darkened, old looking swimming hall. She is wearing differe

nt party outfits, all of them not very revealing and all having black as a base colour, with colourful accent patterns and some glam. The a little rusty and lost looking environment, the poses, and the use of light and shadow allude to film noir and agent movies. In one of the last pictures the same woman in wearing “spacy” looking shoes with a ghost print. Hello there, Mrs. Spooky. All while she seems to be hovering a little above the ground instead of standing firmly, again. 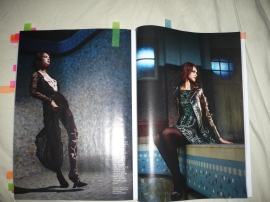 In the beginning I thought of it as nothing more than a general allusion to certain genres, while my partner was insisting it was a specific reference to aliens and The X-Files, and he said that magazines in themselves were telling stories throughout an issue with their selections of pictures.
My opinion began to change when I saw
– a black and white picture with something looking a little bit like a file cabinet, with the words “THE FUTURE IS LEAVING [brand name here] GO FORTH” written on it; while on the left page a young woman in a white office shirt and shorts with a spooked and yet determined look on her face is shown,
– several pictures of women either looking ghostly and/or hovering, some again reminiscent of “being transported upward” abduction. (The one on the right looks like a ghost version of Samantha, in my opinion.) 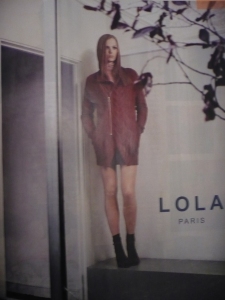 In addition there are references to different science ficiton series and movies:
On a double page, on the left site a kneeling man in shorts/swim trunks which look a bit like boxers (some guys on TV seem to lose their shirts and pants quite often, by the way, this holding true e.g. for Mulder, and for Jacob Black from Twilight) is shown holding a big plush. The plush looks a little like Chewbacca from Star Wars. Meanwhile on the right page a woman is wearing a dark blue and black combination which is reminding me of the Star Treck: The Next Generation uniforms. Some other furry accessories alluding to Chewbacca can the found throughout the magazine, among them shoes, scarves, and coat sleeves. Then there is a picture of two women holding concealer pens like syringes, alluding to the “naughty nurse” concept as well as to medical experiments, which in return allude to alien abduction as well. A general reference to science fiction can be found in a big, double page perfume advertisement, the perfume being calles “ALIEN”. 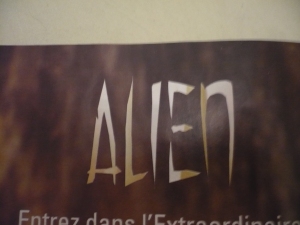 This is the most obvious clue about the whole subliminal theme of the issue. The woman in a golden dress on the other page of the ad also made me think of Gozar the Gozerian from “Ghostbusters”, and on a different page another women is shown wearing nothing but strings of jewellery, again reminding me of Gozar in some weird way, or maybe of a Goa’Uld queen from the “Stargate” universe.
Oh, and don’t forget the advertising for an UFO shaped lamp shade made from old egg cartons.

Concerning the agent/spy thriller/crime thread of hints, there is a “making of” of a series of fashion shots, with a text description of the environment as “un décor à la Agatha Christie”. On a page more towards the end of the magazine there is a black and white photography of a woman in “typical” agent/spy clothes as often seen in the show “ALIAS” who is carrying a video camera (a very old model of video camera, according to my partner, so another reference to old shows like The X-Files and, before that, the film noir). Furthermore, in one advertisement a woman is depicted who is forming a gun with her hands, perhaps alluding to Charlie’s Angels, or to cop-centered shows in general.

So you can see I already had got a lot of hints about a purposeful background story told by the pictures, but then the bomb was dropped: my partner took a look at the very last page inside the magazine and said something along the lines of “look, we know this face!”. One of the two persons on the photo looked like … Agent Mulder, and on his face the typical depressed “Scully is gone” expression. Well, I was already pretty astonished about this “coincidence” when I spotted the name “David Duchovny” in the upper left corner of the page. Yes, as in the original actor playing Fox Mulder in the series. Time for a round of hysterical laughter and a high-five. (Later after seeing some other pictures online I got the impression that the other person on that picture looks at least a little bit like Diana Fowley, Scully’s concurrent in the later seasons.)

So we came to the conclusion that indeed all or at least most of the allusions are not a coincidence, but meant to be there.

A coincidence is merely the fact that we started watching The X-Files only recently so we could recognize the connection between different pictures and ideas.

but few do so

afraid it could clog their nine to five pens

afraid of being called dreamers.

When did dreaming become undesirable?

When did we forget the ancient art of piecing thoughts together into a flaming mosaic, the art of pouring this honey into patterns on the hard-won bread to make the tired and weary hungry again for life and laughter? When did we become scared of emotion deeper than the cavity of our dry mouths?

We don’t win our bread by touching the soil anymore, we don’t remember the stings accompanying the harvest of the last honey of the year, we don’t know how to wait for the right seasons anymore. We are lost, strangers to our world, merely taking whatever is provided by endless acres of supermarkets, grocery stores, vending machines. Consuming in haste, eating on the way to work to earn another year’s worth of bread, and yet not taking the time to taste the piece we hold in our hand.

but few take the time to taste life

afraid of finding out what we’ve given up.

and I won’t leave it to the so-called professionals, self-proclaimed experts

to define what is art and beauty.

I will write poetry again.

This (or better the first few lines) came into my head while I was in bed with a spell of migraine-ish headache this evening. I can’t find anything good to write about for weeks, and then it comes to me while my head is throbbing and I don’t want to move or stare at a glowing computer screen … life is weird. Seriously.

You can also find this on my deviantART account: